Location and How to Get There

The southern part of the Serengeti is a 5 hour drive from Arusha. The word “Serengeti,” derives from the Maasai tribe term meaning “endless plain.” The Serengeti National Park is about the size of Connecticut. 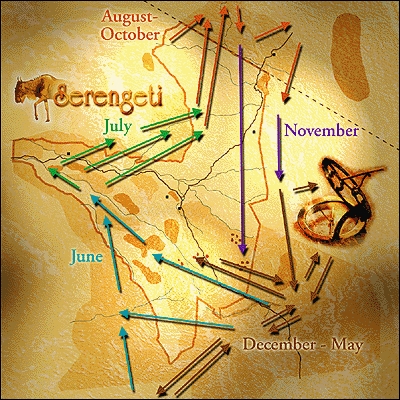 The Serengeti is home to the Big Five (rhino, elephant, buffalo, lion, leopard) plus various other species of mammals, cheetahs, and impalas at Ndutu Forest. The Great Migration animals include the wildebeest, zebras and antelopes. Where the Serengeti plains and woodlands meet in the central Serengeti region supports a diverse mixture of species pre and predatory animals including hyenas, hippos, and crocodiles. The Seronora River, also in the central region is the habitat of the famous tree lion, tree climbing leopards, and prides of lions. There are 400 species of birds, millions of flamingos, and primates such as baboons, vervet monkeys, and the blue and red monkeys. All of these animals have their own natural predators and prey living in the Serengeti.

High Seasons of the Serengeti

The Serengeti is inviting to visitors all year long. Even during its short rainy season (November-December) and long rainy season (March-May), it provides the opportunity to see spectacular views of the annual Great Migration. Throughout the year, visitors can enjoy vast majestic scenic landscapes and the tribal peoples who consider the Serengeti their home.

In addition to game viewing, you can explore the endless Serengeti Plain, watch the calving of the wildebeest, visit Oldvai Gorge: archeological site of Louis and Mary Leakey, see Moru Kopjes which is famous for the endangered black rhino, and see Maasai paintings. In the western region, Lake Victoria invites exploration and fishing. One of the greatest natural spectacles on earth occurs in June-July when the Great Migration crosses the Grumeti and Kiawire Rivers that are filled with hungry crocodiles. From the northern highlands of the Serengeti you will see the famous Mara River and its huge crocodiles.

During this period, the Great Migration is located in the southern Serengeti region. This is “calving season” when wildebeest give birth to a half million newborns during a 3 week period. It’s a time to see the drama of the hunt as predatory animals seek their babies. During this season, the southern Serengeti has specific areas that provide exceptional views of the Great Migration such as the Moru Kopjes where the rare black rhino migrate to at this time of year and where you can see Maasai rock paintings. Lake Ndutu, one of the Rift Valley’s soda lakes, has stunning acacia woodlands that attract a variety of animals to its eco-system. Kusini Camp is also on the wildebeest migration path where they congregate on Kusini’s grassy plains during calving season. It is also an exceptional location for viewing cheetahs as is Gol Kopjes where fresh green grasses attract cheetahs.

During this period of heavy rains many camps are closed in the southern Serengeti. The Great Migration of wildebeest has relocated to the central Serengeti which is also the location of large prides of lions, leopards, and cheetahs.

During this period, the Great Migration of about 1.8 million wildebeest is joined by around 800,000 zebras along with antelopes in the western Serengeti region. This is one of the most exciting and breathtaking times to view the Great Migration, as the massive herds of animals attempt to cross the Grumeti River. As the baby wildebeest and zebras are still young, they make easy prey for the crocodiles that are waiting in the Grumeti River’s turbulent rushing waters. Many animals drown as they cross the Grumeti as they can be pulled downstream as its rushing waters head westward towards Lake Victoria.

During these months, the migration has made its way to the northwestern region of the Serengeti located in south western Kenya called the Maasai Mara. It is an amazingly beautiful sight at this time to see the migration cross the famous Mara River.

The migration is making its way from the Maasai Mara to the southern Serengeti along its eastern border formed by the Great Rift Valley escarpment to begin its calving season again.